Our firm was asked to reshape the branding of The Epiphany School and Foundation, and develop new websites.

The Epiphany brand speaks for itself. The School is steeped in history and synonymous with success. Built on integrity, tradition and excellence, Epiphany shines as a beacon within the New York Catholic school system. Though its roots are deep, the school can not rely on its reputation alone when communicating in a digital era.

The first step was to create a new symbol that would unify everything “Epiphany”. This symbol needed to be contemporary, so it could function across all media, but not lose sight of the school’s legacy. Ultimately, by adding a cross to the recognizable “E” we developed a unique mark that is quintessentially Epiphany. As the centerpiece of a new crest, the revised “E” consolidates the identities of the school, its foundation and family association. Included as well is a redesigned Blue Jay, the school’s mascot. The Blue Jay is ascribed characteristics of resourcefulness, curiosity, faithfulness, and determination, which are all befitting The Epiphany School. The branding campaign was fleshed out with logotypes, colors and fonts that complement the school’s established personality.

The new websites for The Epiphany School and its Foundation are an outgrowth of the rebranding. Though these sites are cutting edge communications tools, they still feel like the Epiphany we know.

We hope they serve the community well. 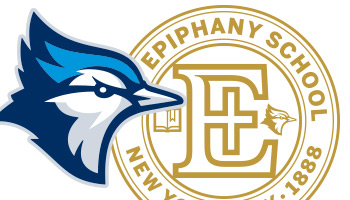